The "Claycomb Karate" system is based on the study of Fundamental techniques of Okinawan/ Japanese Karate-Jutsu. Many applications are also found in Wrestling, Kickboxing and Judo.

​CKA is a (basic techniques) curriculum focussing on the 5 core types of combat that helps its practitioners develop the ability to take a balanced direction of training as they advance to higher skill levels.

Unlike Traditional Systems that focus on Form first and lack application, CKA Focusses on FUNCTION first. Function is the key to determining what the form should naturally become. The form may also change depending on the applied function.“Function is the form and eventually form is the function” 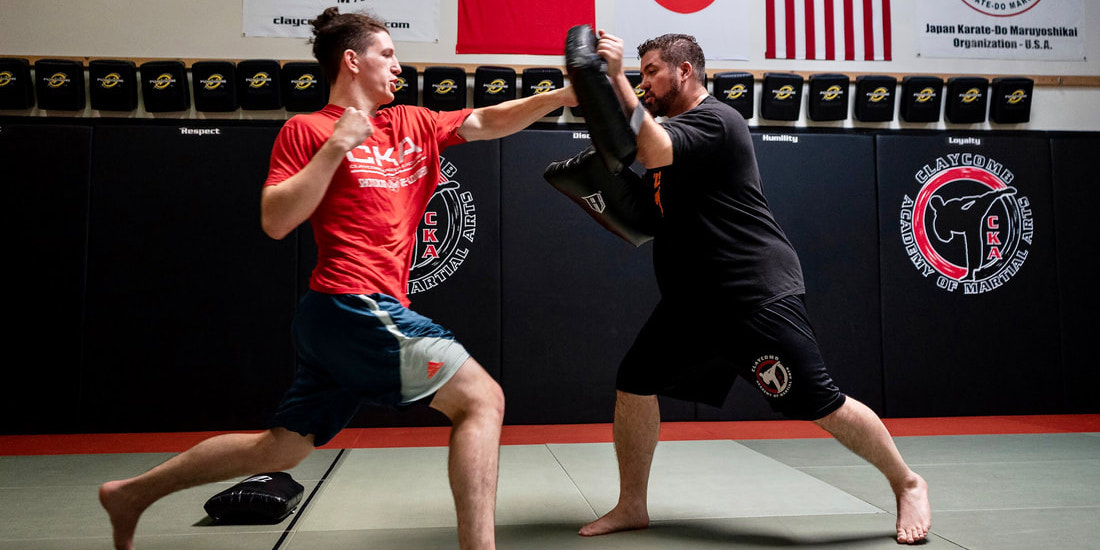 CKA can be considered an evolving style of training due to the natural evolution of technique. In other words, although the basics are all the same at a fundamental level, as quoted by “Gichin Funakoshi”. How to apply technique is always changing, never stagnate.

This is how one should study the marital arts with various realistic scenarios to learn from. This can be applied to sport formats such as point fighting, full contact Kickboxing and MMA, but more importantly SELF DEFENSE.

While CKA offers a progressive mindset to one’s training, it is simply a fundamental direction focussing on effective methods.

Therefore, CKA is NOT a Style, RATHER a focussed system of training with a specific mindset to realistic application.

The 5 fundamental practices and applications studied in CKA are:

Quotes from the OLD MASTERS to ponder:

“Nothing is more harmful to the world than a martial art that is not effective in actual self-defense.” – Choki Motobu (Motobu-ryu founder Kempo and notorious Okinawan Karate street-fighter)

“All kata use the so-called postures (kamae). In fact, there are many kinds of postures and many kinds of kata. While learning these postures should not be totally ignored, we must be careful not to overlook that they are just forms or templates of sort; it is the function of their application which needs to be mastered.” – Choki Motobu

"Using no way as way. Having no limitation as limitation." ~ Bruce Lee

"You must ignore the bad and adopt the good." ~Gichin Funakoshi

"Everything is natural, and changing." ~Choki Motobu