Shihan Joseph Claycomb is a 6th degree Black belt in Shotokan Karate directly from Japan, a 4th Degree in Kanzen Ryu Karate, a 4th Degree in Kobudo (Okinawan Weapons), the first ever Machida Karate certified instructor and he also a Certified Kickboxing Instructor.

He Began his martial arts journey at the age of seven and has trained internationally & locally and has been privileged to have trained with many high-ranking instructors and some of the best traditional martial artists in the world. 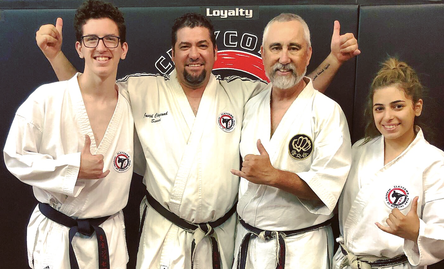 As a Competitor, Mr. Claycomb has extensive experience at Local, Regional and National level in the USA and he has international competition experience in Bahrain and Saudi Arabia.

As a coach, he is the Former National Karate Team Coach of the Kingdom of Bahrain during the mid 90's.

Shihan Claycomb enjoys teaching practical NO NON-SENSE Self Defense techniques with a Combative mentality in all of his classes.

Currently, he is the Chief instructor at Claycomb Academy of Martial Arts in Fontana, CA and the HEAD coach and trainer of the Claycomb KARATE MMA/fighter Team.

His main Passion is teaching Traditional Karate to his students to pass along his experience and the positive values he has benefitted from in his martial arts career.